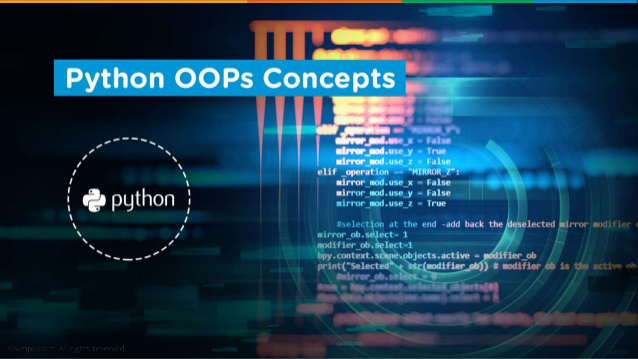 Python is an object-oriented language. It supports all the usual functionality of such languages such as classes, inheritance, and polymorphism. If you are not familiar with object-oriented programming (or scripting), it basically means it is easy to create modular, reusable bits of code, which are called objects. We have already been dealing with objects such as string objects and list objects. Below is an example of creating a string object and calling its methods.

You are free to use Python without using any of its object oriented functionality by just sticking with functions and groups of statements as we have been doing throughout these notes. However, if you would like to create larger scale applications and systems, I recommend learning more about object oriented programming.

Classes are the basic building blocks of object oriented programming. With classes, we can create independent instances of a common object. It is kind of like duplicating a cube a few times. They are all cubes, but they have their own independent attributes.

The first argument in all class member methods (functions) should be the self argument. The self argument is used to represent the current instance of that class. You can see in the above example when we call the print_me method of each instance, it prints the name stored in each separate instance. So objects are containers that hold their own copies of data defined in their class definition.

In the above example, we create two new classes, PolyCube and PolySphere, that inherit from the base class, Shape. We tell a class to inherit from another class by placing the class to inherit from in parentheses when we declare the derived class. The two new classes will have all the data and methods associated with the shape base class. When we call the constructor method, init, of PolyCube and PolySphere, we still want to use the functionality of the constructor of its super class, shape. We can do this by calling the super class constructor explicitly with super(PolyCube, self).init(name). This will set the name variable since the Shape constructor initializes the name member variable. The second method, print_me, contains the added functionality of our new class. The method name is the same as the method name in the super class, Shape. However, when we call the method with cube1.print_me(), Python knows to use the method in PolyCube and not the method from Shape. This is called polymorphism. It allows us to replace, change, or add functionality to existing classes. By creating these hierarchies of objects, you can create pretty complex systems in neat, reusable classes that will keep your code clean and maintainable.

The previous example is an extremely simplified version of Maya’s architecture. Nodes inherit off of other nodes to build a complex hierarchy. Below is part of Maya’s object oriented node hierarchy: